Cyril Connolly noted the depressive effect of numerous and exhaustive biographies of hard-luck poets—reading yet another life of Baudelaire “we know, with each move into a cheap hotel, exactly how many cheap hotels lie ahead of him.” Mr. Lincoln’s Army makes me feel that way. Catton’s masterly narration envelopes you—

the skirmish lines went down the slope, each man in the line separated from his fellows by half a dozen paces, holding his musket as if he were a quail hunter with a shotgun, moving ahead step by step, dropping to one knee to shoot when he found a target, pausing to reload, and then moving on again, feeling the army’s way into the danger zone

—while never allowing you to forget that Malvern Hill and Second Bull Run and Antietam—perfect apocalypses while you’re reading—are but the first clashes of a very long war. There is still more dying. This battle will decide nothing; that general will blunder; these men will die in vain. Mr. Lincoln’s Army ends in November 1862. A year and a half later, in spring 1864, Sherman correctly prophesied that “the worst of the war is not yet begun.”

Petomek, Algonquian, means “trading place.” Patawomeke on Capt. John Smith’s 1612 map. Patowmack in the correspondence of the Founding Fathers, as they discuss the location of the Federal seat. Potomac by 1861, when in camps along its banks the tens of thousands of volunteers who had flocked to defend the nation’s capital and smite the rebellion were drilled into a real army, blue and brass. “The manhood of the eastern states,” a southern officer called this army, though there were Hoosiers and Badgers and Minnesotans among its Boston Brahmins and Maine lumberjacks, its Pennsylvania Germans and Connecticut farmhands, its colorful New York levee of Brooklyn firemen, well-heeled Whartonians in tailored tunics, and French immigrants who sang the Marseillaise on parade and relished the giant bullfrogs found in the Virginia swamps. The Army of the Potomac—“an army of legend,” Catton calls it; “with a great name that still clangs when you touch it.”

Rummaging in the attics of national memory you come across tokens of George B. McClellan, the Army’s first and beloved commander. McClellan was yet another Man of Destiny who popped and fizzled out. Walt Whitman called him the idol of an alternate universe. In 1861, when he took command (aged thirty-four), the northern press proclaimed him “Savior of the Republic” and, in the same breath, “Young Napoleon”—completely antithetical titles. The power brokers who whispered in his ear that the times called for a military dictator at least understood what Napoleon had been about. 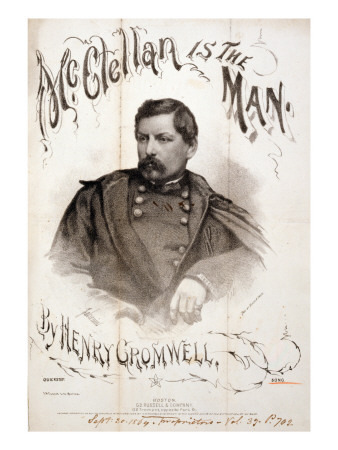 McClellan didn’t simply train the Army; he made its men “feel like soldiers”—a much more mysterious, and ultimately histrionic, process. The men were rewarded for long weeks on the parade ground under the drillmaster’s abuse with elaborate brigade and division reviews, at the end of which their young commander, astride a massive black charger, and followed by an entourage as splendidly mounted and uniformed as himself, went galloping down the lines of hurrahing troops, turning to acknowledge their cheers with a gesture one witness described as going beyond a formal salute—a courtly twirl of his cap “which with his bow and smile seemed to carry a little of good personal fellowship even to the humblest private soldier.”


From McClellan’s performance of the Dashing Young General I step back and note the innocence of the audience that applauds him, tears in their eyes and cheers on their lips. I usually cringe and snarl when any generation of Americans gets called “innocent”—this has been a hard-souled country from the very start, we started out as Indiankillers and slaverapers—but “innocent” must be my word for the ecstatic faith, shared by both sides, that the war would be a brief, flashing, grandly decisive “affair of esprit de corps and hero worship and the élan of highhearted volunteer fighters.” McClellan’s superb martial airs and stagy proclamations—

Soldiers of the Army of the Potomac! I have fulfilled at least part of my promise to you. You are now face to face with the Rebels, who are held at bay in front of their capital. The final and decisive battle is at hand. Unless you belie your past history, the result cannot for a moment be doubtful.

—are mementos of a society that paraded gaily, pleased with its fine uniform, toward an abyss. Think of McClellan as a dealer in Napoleonic goods, at the time a sort of luxury brand promoted by Bonaparte’s nephew and emulator, France’s emperor Napoleon III. French Army fashions were the must-haves of martial ardor. Numerous regiments, especially those made up of New York and Philadelphia firemen, joined the Army of the Potomac costumed in the fezzes and baggy red pantaloons made famous by the Zouaves, France’s North African light infantry. McClellan made his redesign of the French Army’s kepi the standard headgear. He’s wearing one in the studio portrait below, which looks like the carte de viste of a matinee idol. 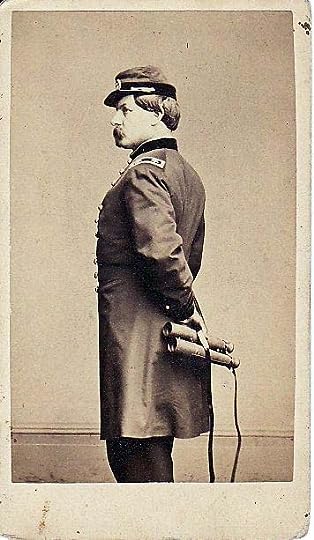 The cruel irony is that McClellan was, as a battlefield general, a failure. Too good to be true. Bella figura, beau ideal, bust. “The final and decisive battle”—just big talk. Lee swatted McClellan back from the doorstep of Richmond not by winning victories or inflicting massive casualties or menacing the supply lines, but simply by showing a ballsy daring, a relentless passion for the attack, which left McClellan completely cowed, psyched-out, mindfucked. (Lee assumed that McClellan’s men were as hollow as their commander—a mistake he didn’t really have to pay for until Gettysburg.) When the order to retreat from the Rebel capital came through, the fiery one-armed general Phil Kearny went to McClellan’s tent and cussed him to his face, said withdrawal in the face of a numerically inferior, winded and barefoot enemy was evidence of “cowardice or treason.” Plenty of people at the time thought treason—Whitman, for one, always maintained McClellan “straddled”—but the panicky pants-wetting cables to Lincoln scream cowardice. As do McClellan’s letters to his wife, in which Catton finds “too much lingering on the adoration other man feel for him, on the wild enthusiasm he arouses, on the limitless power and responsibility that are his.” “What buried sense of personal inadequacy,” Catton asks, “was gnawing at this man that he had to see himself so constantly through the eyes of men and women who looked upon him as a hero out of legend and myth”?


Whatever the precise nature of his demons, McClellan’s first campaign set the pattern of clumsiness and deadly ineffectuality that would haunt the Army of the Potomac until Grant came along and started swinging it like a sledgehammer. It was a hard-luck army, an immensely powerful industrial juggernaut steered, in its early years, by bumblers and sleepwalkers and lightweight braggarts; baffled on the road to victory, constantly running off into the ditch. I’m deep into Glory Road, the second volume of the trilogy, and there are more fumbled battles, more cheap hotels—les poètes maudits, les soldats maudits. Catton quotes countless letters home that describe the army’s malaise, but none of their writers, eloquent as they so often are, captures the mood of helpless nightmare quite like the German soldier turned anarchist playwright Ernst Toller, who recalled World War One thus: “We were all of us cogs in a great machine which sometimes rolled forward, nobody knew where, sometimes backwards, nobody knew why.”

Please choose whether or not you want other users to be able to see on your profile that this library is a favorite of yours. Finding libraries that hold this item You may have already requested this item. Please select Ok if you would like to proceed with this request anyway. WorldCat is the world's largest library catalog, helping you find library materials online. Don't have an account? Your Web browser is not enabled for JavaScript.

Charles Bruce Catton October 9, — August 28, was an American historian and journalist, known best for his books concerning the American Civil War. Although his books were researched well and included footnotes, they were not generally presented in a rigorous academic style. He won a Pulitzer Prize during for A Stillness at Appomattox , [2] his study of the final campaign of the war in Virginia. Patten Catton, and raised in Benzonia, Michigan. His father was a Congregationalist minister , who accepted a teaching position in Benzonia Academy and later became the academy's headmaster.

Product Type Clear. Published by Doubleday Anchor Seller Rating:. About this Item: Doubleday Anchor, Condition: Good. First Edition. Shows some signs of wear, and may have some markings on the inside.

What does yours truly mean